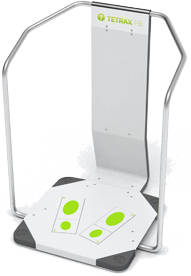 Tetrax FB works within the principles of Dynamical System Theory and the Theory of Simplexity, which state that a human body’s balance in space is based on the cooperation and interaction of a multiplicity and complexity of many subsystems which are under the control of efficient neurophysiological mechanisms.

This system assesses pressure fluctuations produced by the heels and toes of a subject standing on four separate platforms two for each foot and their respective halves.

The pressure plates emit electronic signals which are digitalized and processed by the Tetrax FB software to yield a set of unique parameters. Some parameters are equivalent to those that can be
obtained through traditional posturography methods, while others are specific to Tetrax FB.

Calculated results based on these parameters, which are statistically and functionally independent, reflect the interactions of the various neuro-physiological and neuro-anatomic subsystems involved in balance control.